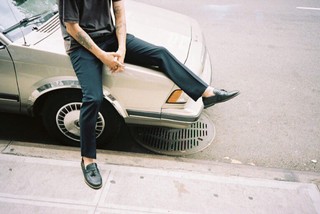 Erik wearing the HRS Del Rey’s
What do you think about the relationship of skateboarding to design and creativity, and what’s your approach to it all?
I think that if you’re into skateboarding then it’s just naturally a part of you. We’re always studying our surroundings, analysing architecture, customising shoes, envisioning skateboard graphics. For me, travelling and experiencing new things, seeing what people are capable of, those are probably the most inspiring things for me.
What inspires you in skateboarding and beyond your board?

H-Street, old Blind and World [Industries] stuff. Natas [Kaupas], Gonz, Goodie Mob, Townes Van Zandt, Nirvana, documentaries about various things, old skate footage and old photos.
Nice. You’ve released a series of sick pro shoes over the years – did you design all of them?
Thanks! I’ve had probably ten pro shoes over the years, and yes, I designed or had a hand in all of them.
What drew you toward shoe design?
I’ve been into some kind of design ever since I can remember. I was given the opportunity to be a shoe designer because I was a pro skateboarder, so I’ve always been really grateful and enjoyed the process. I was drawn to it for various reasons – I like creating things, I like customising things. It’s just how I am.
I’ve seen you do graphics for Deathwish, too. Do you have a hand in all of that still?

I’m most proud of the artists that I’ve had the privilege to work with. When I have an idea I just translate it and they take it from there, so it’s mostly them that deserve credit. Esao Andrews is my friend I grew up with, but he’s also probably my favourite artist to work with. He did my first board graphic for Zero, and then a lot over the years for Baker and Deathwish. 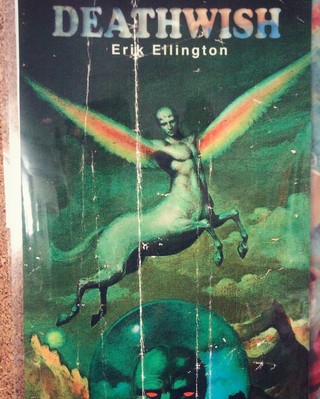 Do you have any tips for people who are still honing their skills creatively?
The thing I have the hardest time with is caring too much about what other people will think, or what their perceived response will be. That’s something I’ve got to work on constantly, so I would say trust your instinct and work hard on it. Be willing to take input, but be careful to not get carried away and lose sight.
Good advice. Did you really invent the handboard?
Yeah. When we were kids, my friend Esao and I used to make little skateboards out of cardboard. They were actually way more intricate than that, but it would take a long time to explain… we used cardboard, clothes lines, pens for the trucks, bearings for the wheels. We got really good at them, surpassing anything we could actually do on a real skateboard. When I moved to California, I approached the company that was making fingerboards at the time and I showed them a video we’d made, kind of like a sponsor me tape. They liked it, and eventually went into production with it, giving us an inventor’s royalty and a contract.
What have you been working on more recently?
I’ve been working on a new shoe brand for the last year or so – it’s called HRS, Human Recreational Services. We just launched with a few shoes. I did a collaboration with Baume Watches and hosted an event in Paris last month. The collab shoe releases next week.
Congrats. Quickly, we have to talk about the Carlsbad big-spin and resulting after-bang. Can you tell me the story behind the making of that trick and your reaction?
I went there so many times to try that. I’d always break a few boards… for some reason, even though I was pretty good at that trick, it was really hard to roll away. When I did, I just lit up! Sometimes you don’t have control over the emotions [laughs]
Are there are any other highlights from your pro career that come to mind?
Just being from Alaska and following my dream of becoming a professional skateboarder. The reality of that happening and the outcome of everything that followed is probably the most important to me.
Last up, what’s coming next?
I have a lot of plans, but people will see it when they see it. HRS isn’t a typical skate shoe company; I’m making shoes and accessories that are inspired by skateboarding, but a lot of the stuff won’t even be skate shoes. I’m truly passionate about what I’m doing.
It’s a little outside of my comfort zone, because it’s different from what I’ve done in the past, and it’s challenging me to look at things from a new perspective. I’m learning a lot.
A few weeks ago we went to Italy to start developing shoes there, and the day after tomorrow I fly to the Dominican Republic to visit our factory and check everything out. I’m living a life beyond my wildest dreams, and my plans for it are always evolving.
No Comply Network2020-03-25T08:40:04+00:00